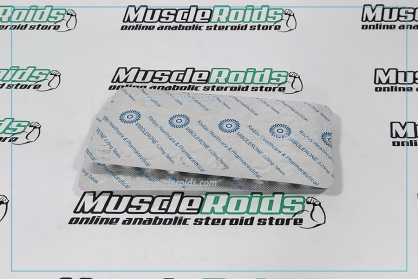 The active ingredient (AI) in the product: Mibolerone

Radjay Mibolerone 100 tabs  (aka Cheque Drops) is really powerful steroid created from nandrolone. This steroid shows more activity than nandrolone. Radjay Mibolerone has maintained its status among the most effective steroids on the planet. During standard animal tests, mibolerone demonstrated a 41-times greater anabolic activity than methyltestosterone. Androgenic activity was 18 times greater. Usually, it had been utilized by athletes in mass-gaining cycles and also to stimulate aggression before training or competitions.

Radjay Mibolerone (Cheque Drops) was initially produced like a veterinary medicine for female dogs, however, it was utilized by athletes to boost aggression before the competitions.

There's a properly-known rumor that Mike Tyson was under Cheque Drops as he bit off Holyfield's ear, right during the fight. But anyway, later the truly amazing guru Dan Duchaine found using Cheque Drops in modern bodybuilding long before that incident.

Cheque Drops were considered off the production and set again on several times before he acquired wide recognition in serious fighters' circles. Cheque Drops has a less strong analog of metribolone, also referred to as methyltrienolone or R1881. Metribolone is less selective for androgen receptors than compared with Radjay Mibolerone.

No medical prescription is required.

Pay attention: when you make an order from outside of Moldova (USA, UK, Germany, Western Europe etc.), parcels are not sent separately. We collect orders for 3-4 days before shipping out, then we give you the tracking code by which you track the current location of your order in the process of delivery.